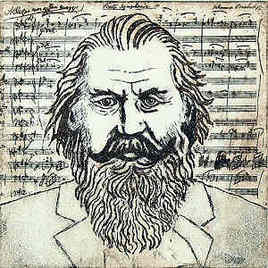 Johannes Brahms was born in Hamburg, Germany on May 7, 1833. Johannes' father, a town musican, gave him his first musical instruction. At the age of seven he studied piano with Otto Friedrich Willibald Cossel. Young Brahms gave concerts in Hamburg and worked playing piano in restaurants and theaters to help support his family.

When Brahms was 20 he met famous composers Franz Liszt and Robert Schumann. Schumann was so impressed with Brahms' music that he wrote an article for a music journal that made Brahms famous. Brahms' success was also due to his hard work and his critical attitude toward his own music. He never felt he could live up to the standard set by Ludwig van Beethoven.

Brahms was one of the few music composers who could devote his time completely to composing without having to accept other employment. In fact, he spent so much time with his composing that he sometimes neglected his appearance. Sometimes, when he forgot to attach his suspenders, he would have to hold his pants up while conducting to keep them from falling down.

In 1889 Thomas Edison, an American inventor, visited Brahms in Vienna and invited him to perform for an experimental recording. Brahms played an abbreviated version of Hungarian Dance No.1 on the piano. The performance is one of the earliest recordings ever made by a major composer.

In later years, Brahms often participated in performances of his own compositions. In 1890, at the age of 57, he decided to give up composing. But this did not last long. He soon started composing again and his efforts in these final years produced several works that are now recognized as masterpieces.

Johannes Brahms died on April 3, 1897, a celebrated composer of the Romantic Era. His most notable works include his Double Concerto for Violin and Cello, Liebeslieder Waltzes, Academic Festival Overture and his Lullaby.