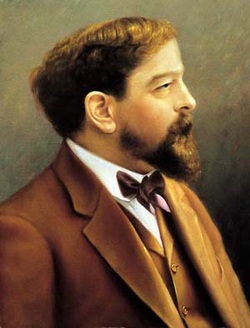 Claude Debussy was born in Saint-Germain-en-Laye, France, on August 22, 1862.  He was the oldest of five children.  His father, owned a china and crockery shop, and his mother, Victorine Manoury Debussy, was a seamstress.

Claude began piano lessons at the age of seven with an Italian Violinist named Cerrito. His musical talent was quiet evident, and by the age of ten Claude began studying music at the Paris Conservatoire.  During his time there he studied composition, music history, piano, organ, and solfeggi.  His experimental approach to composing music was problematic to his teachers however, as he did not like following the strict rules of the Conservatory.

In 1884 Debussy was awarded the Prix de Rome for his composition L'enfant prodigue (The Prodigal Son), and received a scholarship to the Academie des Beaux-Arts.  In the next year Debussy wrote of his longing to pursue his own way composing, saying, "I am sure the Institute would not approve, for naturally it regards the path which it ordains as the only right one.  But there is no help for it! I am too enamored of my freedom, too fond of my own ideas!"

Debussy returned to Paris in 1887, and soon after was introduced to Gamelan music (Indonesian music performed with bells, gongs and xylophones, and sometimes music, producing a unique new sound.  The music written during this period represents his early masterpieces, including Ariettes Oubliees (Forgotten Arias) 1888, Prelude a l'apres-midi d'un faune (Prelude to the afternoon of a Faun) 1892, and the String Quartet (1983).

Claude Debussy died on March 25, 1918. He is remembered as one of the most influential composers of the Impressionist period.  His most popular pieces include Prelude a l'apres-midi d'un faune (1892), Pelleas et Melisande, La Mer (The Sea) 1905, and Children's Corner Suite (1908), a six-movement suite for solo piano which includes the popular Golliwogg's Cakewalk.