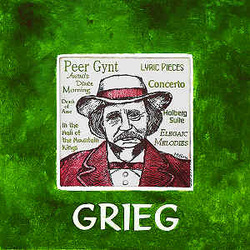 Edvard Grieg was born in Bergen, Norway on June 15, 1843. For most of Edvard's life Norway struggled to be its own nation separate from unions with other countries. It was his music that helped give Norway its own identity. For his contribution, he came to be regarded as a hero to the people of Norway. Many of his works include Norwegian folksongs and paint a musical picture of the landscape of the beautiful countryside.

Edvard's first music lessons were with his mother. He began writing music at the age of nine. Encouraged by a famous Norwegian violinist, Edvard enrolled in Leipzig Conservatory at the age of fifteen. He graduated four

years later as a talented pianist and composer.

For a number of years Grieg and his wife lived in Copenhagen, Denmark and toured Europe performing his music. Then in 1885 they returned to his beloved Norway to build a cabin in a villa called Troldhaugen which means "Hill of the Mountain Men". From this cabin that overlooked the mountains and a fjord, Grieg wrote some of his greatest compositions.

Edvard Grieg died on September 4, 1907 in his hometown of Bergen, Norway. He is best known for his Piano Concerto in A Minor and his music for Henrik Ibsen's stage play Peer Gynt, which includes two of his best known works: Morning Mood and In the Hall of the Mountain King.