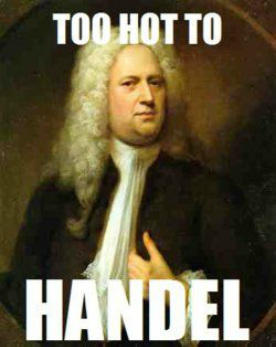 George Frideric Handel was born on February 23, 1685 in the North German province of Saxony, in the same year as Baroque composer Johann Sebastian Bach. George's father wanted him to be a lawyer, though music had captivated his attention. His mother in contrast, supported his interest in music, and he was allowed to take keyboard and music composition lessons. His aunt gave him a harpsichord for his seventh birthday which Handel played whenever he had the chance.

In 1702 Handel followed his father's wishes and began his study of law at the University of Halle. After his father's death in the following year, he returned to music and accepted a position as the organist at the Protestant Cathedral. In the next year he moved to Hamburg, and

accepted a position as a violinist and harpsichordist at the opera house. It was there that Handel's first operas were written and produced.

In 1710, Handel accepted the position of Kapellmeister to George, Elector of Hanover, who was soon to be King George I of Great Britain. In 1712 he settled in England where Queen Anne gave him a yearly income.

In the summer of 1717, Handel premiered one of his greatest works, Water Music, in a concert on the River Thames. The concert was performed by 50 musicians playing from a barge positioned closely to the royal barge from which the King listened. It was said that King George I enjoyed it so much that he requested the musicians to play the suite three times during the trip!

By 1740, Handel completed his most memorable work - the Messiah. It is said that when the king first heard the "Hallelujah Chorus" he rose to his feet. This tradition continues to this day.

On April 6, 1759 Handel conducted his last performance of the Messiah and returned home in poor health. He died on April 14, 1759 and was buried in Poet's Corner of Westminster Abby in London, England. More than 3000 people attended his funeral. 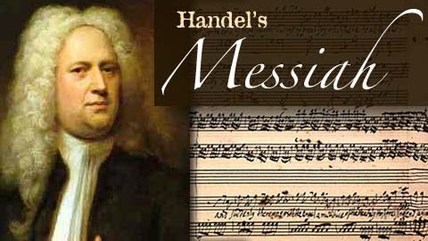 The music for Messiah was completed in 24 days of swift composition.

He turned to English oratorio in the 1730s, in response to changes in public taste; Messiah was his sixth work in this genre. Although its structure resembles that of conventional opera, it is not in dramatic form; there are no impersonations of characters and very little direct speech.

It was first performed in Dublin on 13 April 1742, and received its London premiere nearly a year later. After an initially modest public reception, the oratorio gained in popularity, eventually becoming one of the best-known and most frequently performed choral works in Western music.

Handel wrote Messiah for modest vocal and instrumental forces, with optional settings for many of the individual numbers. In the years after his death, the work was adapted for performance on a much larger scale, with giant orchestras and choirs.

Handel's Messiah has been described by the early-music scholar Richard Luckett as "a commentary on [Jesus Christ's] Nativity, Passion, Resurrection and Ascension", beginning with God's promises as spoken by the prophets and ending with Christ's glorification in heaven.