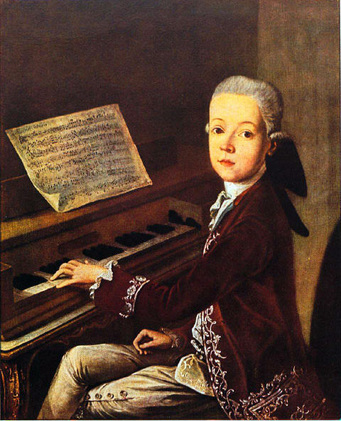 Wolfgang Amadeus Mozart was born to Leopold and Anna Maria Pertl Mozart in 1756 in what is now Salzburg, Austria. His father Leopold Mozart was a choir master, a minor composer and an experienced teacher. When Mozart's sister Nannerl was seven she began keyboard lessons with her father while the three year old Wolfgang watched with fascination.

At age 4 Wolfgang himself began keyboard lessons playing without fault and with great sensitivity, and by age 5 he was composing short pieces which his father wrote down for him. In the following year Wolfgang and Nannerl began traveling through Europe with their father giving concerts in the courts of Europe. While touring, Mozart learned to play the violin and the organ.

harpsichord. His skills as a composer continued to develop, and by the age of 13 he had composed his first opera at the request of an emperor.

By the time Mozart was in his mid-twenties he had established himself as one of the most accom- plished keyboard players in Vienna, and was recognized as an talented composer. Some of his most famous pieces include Eine Kleine Nachtmusik for string orchestra, which means 'A Little Night Music', and Ah vous dirais-je, Maman* for piano solo, which is a set of twelve variations on a french tune that Mozart would have known as a young boy.

On December 5, 1791, Mozart died at 35 years of age, leaving behind a collection of more than 600 compositions, including works for the symphony, the piano, and the opera. Some of these pieces are considered to be the finest works in the Classical style. 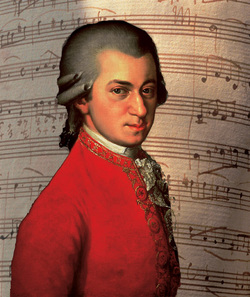