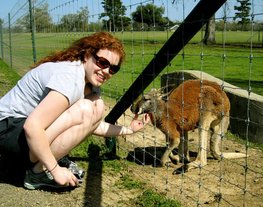 Eleanor Bach began her serious musical studies at the Interlochen Arts Academy in Michigan, where she spent three summers.  There, she was seen in "The Pirates of Penzance", "The Gondoliers", and "Patience".  During this time, she was also a student at the New Orleans Center for the Creative Arts.  She was active in vocal and choral studies in both programs.  She completed her high school studies at the North Carolina School of the Arts at the University of North Carolina where she was one of eight high school vocal students studying in a college-conservatory setting.  At NCSA, she was seen in "Don Giovanni" and "Riders to the Sea".

Following high school, Eleanor began her undergraduate degree at the Boston Conservatory where she majored in Vocal & Opera Performance.  While completing her undergraduate work, she held roles in "The Crucible", "Il Matrimonio Segreto", and "Trouble in Tahiti".  Currently, she is earning a Masters in Music Education from the Boston Conservatory.  She studies all aspects of music education, including conducting, choral methods, ear training, and theory.

While working towards her Masters in Music Education from afar, Eleanor served for six years on the faculty of Most Blessed Sacrament in Baton Rouge, where she taught choir, general music, and theatre.  She is the Choral Director of the Youth Choir at St. Aloysius Church & Our Lady of Mercy Catholic Church Children's Choir in Baton Rouge and the Assistant Director for the Greater Baton Rouge Children's Chorus.

The captivating new family music special Ethan Bortnick Live in Concert: The Power of Music features the amazing 12-year-old composer, pianist, and entertainer Ethan Bortnick, accompanied by a 50-piece orchestra, 4-piece band, and the 120-member Kids Choir, in a program that had the live audience dancing in the aisles!  Ethan performs with passion and heart - his fingers fly across the piano keys in "Minute Waltz," and the audience rocks out to "Rock Around the Clock," claps to the beat of "Lean On Me," and participates in a very enthusiastic sing-along of "Crocodile Rock." You will get chills when you hear "The Earth Song," and feel the power of music when Ethan performs an emotional and inspiring rendition of "We Are the World." Beyond his gifts as a consummate musician, Ethan Bortnick is a driven humanitarian, too. This moving special highlights his belief that music has a higher purpose -- an ability to emotionally connect people, encourage them to help others, and ultimately, affect change in the world, as presented in his own eloquent composition "Anything is Possible." Through his music, Ethan has already helped raise more than $30 million for children's charities and other causes across the world. Ethan Bortnick is the youngest performer ever to headline his own international concert tour, and he has so far appeared in more than 200 concerts in the United States, Canada, Brazil, South Africa and Australia. This special showcases Ethan's amazing talent, passion for music, and generous spirit...all at the ripe old age of 12! 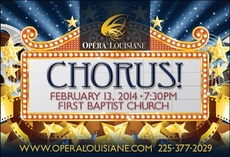 Opéra Louisiane’s Community Chorus, The Baton Rouge Symphony Chorus, and The Greater Baton Rouge Children's Chorus join forces once again in a concert of familiar songs from the Broadway and operetta repertoire. Maestro Michael Borowitz conducts the chorus, orchestra and four featured soloists in selections by Gilbert & Sullivan, Lloyd Webber, and many more. 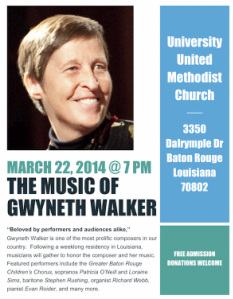 On March 22nd, 2014, the Greater Baton Rouge Children’s Chorus will perform in a concert celebrating the music of Gwyneth Walker, where they will perform her highly acclaimed arrangement of How Can I Keep from Singing?  This unique opportunity will allow students the chance to interact with the composer, as well as see and hear professional musicians perform the music of a living composer.  Held at University Methodist Church in Baton Rouge, the concert will take place on March 22nd, 2014 at 6:30 PM.
Sopranos Eleanor Bach and Jennifer Ellis, directors of GBRCC, will perform a world premiere Ms. Walker's art song set "Songs of the Spirit."

Widely performed throughout the country, the music of American composer Gwyneth Walker is beloved by performers and audiences alike for its energy, beauty, reverence, drama, and humor. Dr. Gwyneth Walker (b. 1947) is a graduate of Brown University and the Hartt School of Music. She holds B.A., M.M. and D.M.A. degrees in Music Composition. A former faculty member of the Oberlin College Conservatory, she resigned from academic employment in 1982 in order to pursue a career as a full-time composer. For nearly 30 years, she lived on a dairy farm in Braintree, Vermont. She now divides her time between her childhood hometown of New Canaan, Connecticut and the musical communities of Sarasota, Florida and Randolph, Vermont.