Quartet For The End Of Time
Premiered in 1941 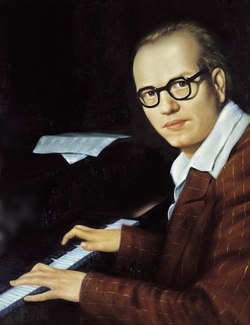 Childhood & Musical Studies: Olivier was born into a literary family.  His mother, Cecile Sauvage, was a poet and his father, Pierre Messiaen, was an English teacher and also translated the plays of William Shakespeare into French.  When World War I started his father enlisted in the army.  It was while his father was away fighting that he developed a love for theater, music and the Catholic Religion.  He also started taking piano lessons, though he had already learned many songs by ear already.  His father returned home from the war when he turned 10 and moved the family to Paris, where he had just gained a teaching position.  At age 11 Messiaen entered the Paris Conservatory to study Music.  He won many prizes and awards while in school for his compositions, orchestrations & organ playing.  Many of his compositions depict what he called "the marvelous aspects of the faith," and drew from his deeply held Roman Catholicism.

At age 19 he took his first organ lesson, he was a natural, and four years later he was appointed head organist at La Sainte-Trinite (a position he held for over 60 years!)  At age 22 he married a violinist and a composer, Claire Delbos, they loved to make music together and often performed together. Then 5 years later Claire and Olivier had a son named Pascal (1937).

World War II: At the outbreak of the war, Messiaen was drafted into the French army.  However he was captured at Verdun and taken to Gorlitz in May of 1940, where he was imprisoned at Stalag VIII-A.  He was released a year later in May of 1941 and was appointed a professor at his former school, the Paris Conservatory.  He taught there until he retired in 1978.  His students said he was an amazing professor because he didn't try to tell them his way or music was the right way, but rather encouraged his students to find their own compositional style, sound & voice. 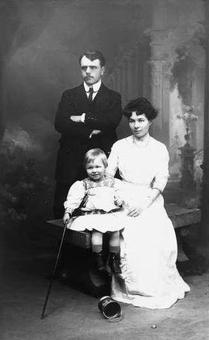 Olivier Messiaen with his parents in 1910.
The piece was written for the fellow musicians in his concentration camp.  A violinist, Jean le Boulaire, a cellist, Etienne Pasquier, & a clarinetist, Henri Akoka.  He wrote a short quartet for them with himself at the piano.  He was only able to write the piece because a sympethetic guard provided him with some paper and a pencil.  It was premiered on January 15, 1941, with old broken instruments in the rain to an audience of prisoners and prison guards.   However Messiaen later recalled: "Never was I listened to with such rapt attention and comprehension." 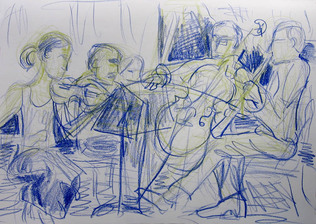 In the preface to the score Messiaen wrote that the work was inspired by text from the Book of Revelation.
(Rev 10: 1-2, 5-7)  King James edition.

And I saw another mighty angel come down from heaven, clothed with a cloud;
and a rainbow was upon his head, and his face was as it were the sun, and his feet as pillars of fire...
and he set his right foot upon the sea, and his left foot on the earth...
and the angel which I saw stand upon the sea and upon the earth lifted up his hand to heaven,
and sware by him that liveth for ever and ever...
that there should be time no longer: But in the days of the voice of the seventh angel,
when he shall begin to sound, the mystery of God should be finished...

According to the composer, the Quartet was intended not to be a commentary on the Apocalypse, nor to refer to his own captivity, but to be a kind of musical extension of the Biblical account, and of the concept of the end of Time as the end of past and future and the beginning of eternity. For Messiaen there was also a musical sense to the angel's announcement. His development of a varied and flexible rhythmic system, based in part on ancient Hindu rhythms, came to fruition in the Quartet, where more or less literally Messiaen put an end to the equally measured "time" of western classical music.

The architecture of the Quartet is both musical and mystical. There are eight movements because God rested on the seventh day after creation, a day which extended into the eighth day of timeless eternity. There are intricate thematic relationships, as for example between movements two and seven, both of which are about the angel; and stylistic and theological relationships, as between movements five and eight.