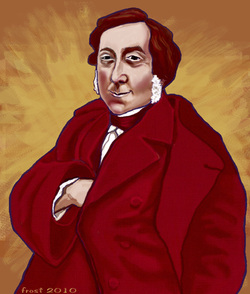 Gioachino Antonio Rossini was born in Pesaro, Italy on February 29, 1792 into a family of musicians. Gioachino's parents began his musical training at a young age. At the age of six, he was playing the triangle in his father's band.

Antonio's father made a bad choice and had to go to jail. His mother, as a result, decided to move her family to Bologna to support them as an opera singer. As a child, Antonio performed as an apprentice opera performer, and later entered the Conservatory of Bolonga to study cello and composition. Because he was so taken by the music of Mozart his classmates referred to him as "the little German."

By the early 1820's Rossini had been appointed the Director of the San Carlo Theater in Naples. During his 19 years in this position, he wrote 36 operas that are full of humor and beautiful melodies. Then suddenly he stopped writing music. For the next 40 years of his life he did not compose at all.

Rossini died on November 13, 1868. His most successful and best known works include his operas The Barber of Seville completed at the age of 18, and William Tell, his final opera.