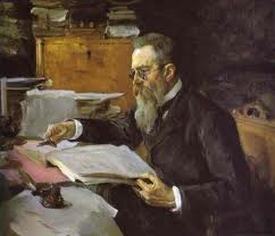 Childhood: Nikolai was born into an aristocratic family with a long line of military and naval service.  At age six he began taking piano lessons, however he had been playing by ear since he was even younger.  His teachers were frustrated with him because he showed a lack of interest and that he was not good at keeping time, though they did say he had a good ear.  By age 10 he started composing, however he still preferred literature to music, he said that through reading tales of his brothers travels he developed interest in things like the sea without ever seeing them.  At age 15 he started studying with a new professor and it was because of this teacher that he devoted his life to musical composition.  His lessons were cancelled by his brother as he got older and had more duties in the Navy, however his teacher encouraged him to come by and just visit each week and discuss music.  He was soon introduced to some new friends, Mily Balakirev, Cesar Cui & Modest Mussorgsky; all three of these men were well known as composers even though they were only in their 20's.

While he was on duty sailing in the Navy ships he would frequently compose music in his free time.  By the end of his 2 year and 8 month round on the Almaz he had completed three movements of his symphony.  Whenever his ship would dock he would buy scores and a piano to play them upon.  He was constantly studying other musical compositions and reading literature. 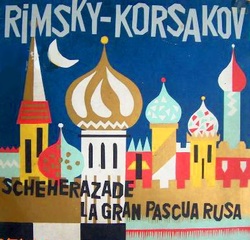 This is a symphonic suite based on One Thousand and One Nights, sometimes know as The Arabian Nights.  This work combines two features common to Russian music and of Rimsky-Korsakov: colorful orchestration & an interest in the east.  It was written to produce a sensation of fantasy stories from the Orient.

The composer made the movement titles vague so that they were not associated with any particular stories of the tales or voyages of Sinbad.  He wanted the listener to hear the music and create thoughts in their head of a fairy tale adventure.  Rimsky-Korsakov said that he kept the title because he wanted it to put the idea of middle eastern fairy tales into the listeners head.

As far as stories go, it's hard to top Nikolai Rimsky Korsakov's Scheherazade. It's a treasure trove—a story about one of history's greatest storytellers and the tales she weaves.

Scheherazade is the young bride of the Sultan. After one of his wives cheats on him, he decides to take a new wife every day and have her executed the next morning. But it all stops with Scheherazade. She marries the Sultan in order to save all future young women from this fate. She tells the Sultan fascinating stories, leaving him in such suspense each night that he can't execute her the next morning for fear of not hearing the end of the story. After 1,001 of these well-told tales, the Sultan relents.

Rimsky-Korsakov wrote Scheherazade (a symphonic suite) in the summer of 1888.