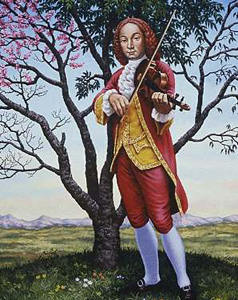 Antonio Vivaldi was born on March 4, 1678 in Venice, Italy. Antonio's father, Giovanni Battista, a barber before becoming a violinist, taught young Antonio to play the violin and then toured Venice playing the violin with him.

At the age of 15, Antonio began training to become a priest. At the age of 25, he was ordained a priest and soon after became known as the II Prete Rosso, "The Red Priest", because of his red hair. Due to his health, he left the priesthood in 1703 after only 3 years. But he was still able to pursue a career in music.

Vivaldi's music is joyful, almost playful, revealing his own joy of composing. In addi- tion, Vivaldi was able to compose non-academic music which means it would be enjoyed by many people rather than just college professors. It was these qualities that made Vivaldi's music very popular.

Vivaldi's The Four Seasons, composed in 1723, is a set of four concertos for violin. It is his most popular work and is among the most popular works of the Baroque Era. For this composition he wrote sonnets to match each season.