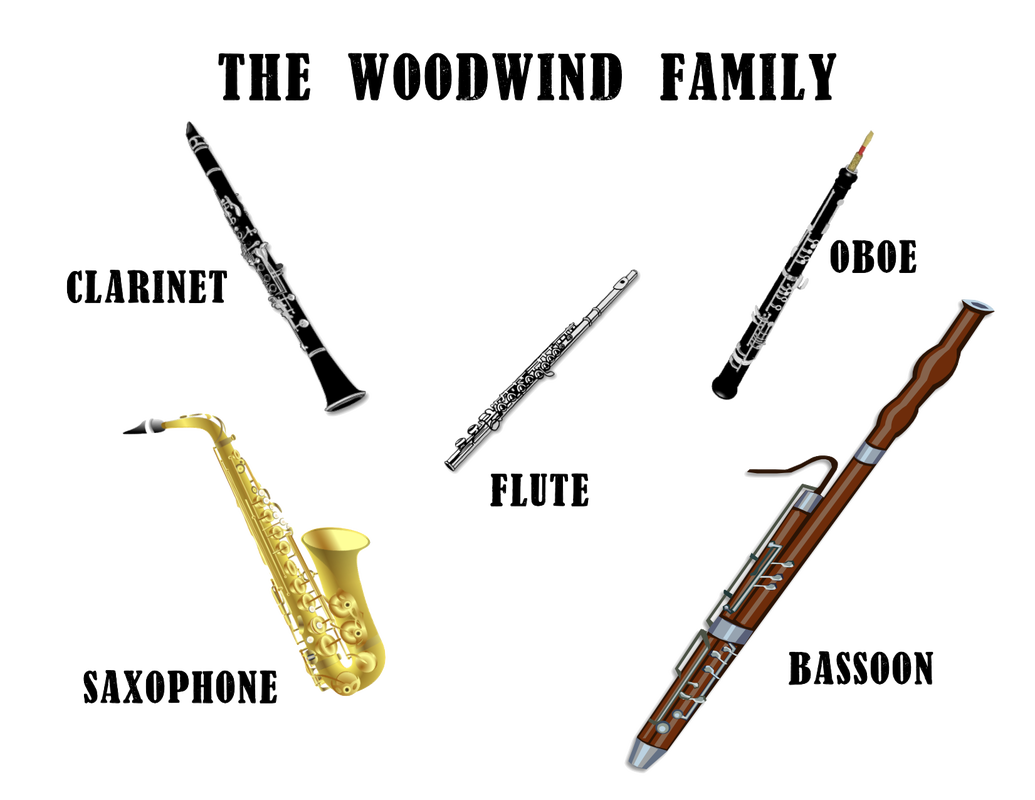 Vibrations begin when air is blown across the top of the instrument. The player blows air across the small hole in the mouthpiece to produce a sound that can be either soft and mellow or high and piercing.

Originally made of wood, the flute is now made from silver or gold and is about 2 feet in length. 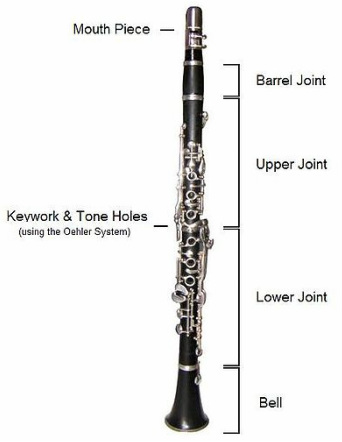 Most clarinets have the shape of a long, straight black tube. This tube is called a bore, most are made of wood.

The clarinet bore has a series of holes down its front and a single hole in back. Metal keys open and close these holes. By pressing the correct metal keys, a clarinet player can produce a sound that is higher or lower in pitch.

The oboe is related to the English horn and is descended from the horn shepherds used for thousands of years. The pitch falls in between that of the flute and the English horn, and it is tuned in the key of C.

The oboe is descended from an instrument known as the shawm that dates from about 2800 B.C. It was introduced to the French courts in the mid-17th century and became part of classical orchestras in the beginning of the 18th century.

The oboe is a double reed instrument with eight keys and a range of a little over three octaves. 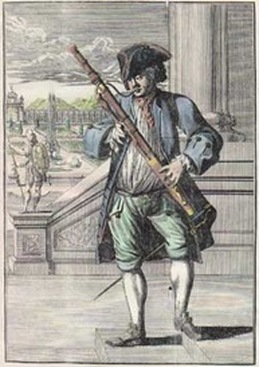 Bassoons have 8 feet of tubing and are bent into a "U" shape, which makes them easier to play.

Like the oboe and the English horn, bassoons have conical bores. With conical bores, one end of tubing is wider than tubing at the other end of the instrument.

The curved metal tube that makes up the body of the bassoon is called the bocal. At the end of the bocal, a double reed is attached.

The bassoon is often referred to as the clown of the orchestra because of its ability to make comical and unique noises.

The bassoon is held to the side of the player because it's way too big to hold in the middle like the other woodwind instruments. Because the bassoon is somewhat heavy, it is supported by a seat strap which is hooked to the end of the bassoon and then placed over the player's chair. 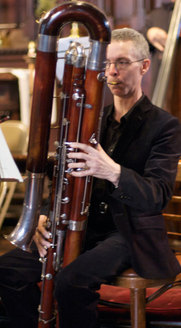 The contrabassoon is able to play lower than any other instrument in the symphony orchestra.


The contrabassoon has a whopping 16 feet of tubing! If instrument builders hadn't decided to "fold" the tubing, you would have to stand on a very tall ladder to play the contrabassoon - but then how would you reach the keys? 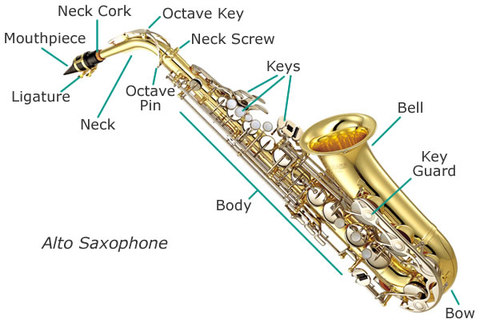 While the saxophone has been around since the nineteenth century, the instrument truly became prominent with the rise of the uniquely American music style of jazz. It is also widely used in marching bands

While the saxophone is made out of brass, it is classified as a woodwind instrument because it produces sound through a reed, instead of through the player's lips as with a trumpet.

The first saxophone was created in the 1840s by Belgian Adolphe Sax. Over time, extra keys were added and fingerings changed.

The most widely known type of saxophone, however, is the alto saxophone. 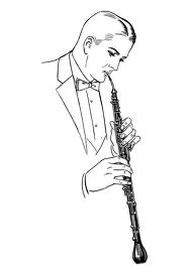 Like the other members of the oboe family to which it belongs, the English horn is played through a double reed.

The instrument is pitched a fifth lower in tone than the standard soprano oboe. Because of its deeper voice, the English horn also is referred to as a tenor oboe.

Instruments like the English horn were used in the 16th century and seem to have entered the conventional orchestra in works by the 17th-century English composer Henry Purcell.